The last Con of a very busy May was the London MCM.

Last May's event hadn't been great. We'd had one table, which was stuck in the middle of a row of mostly artists selling prints and we were effectively invisible when approaching from one side due to the wall of prints that the table next to us had put up dividing the tables.
Still, I'm not one to complain and we took this in our stride.
Some Cons are better than others.
This time around we had two tables again and Jemma and I were joined by Colin and Scott.
We were hoping that this May's MCM would be better than the last.
In short, it was.
It certainly got off to a fun start when, on arriving, I found this on my table.. 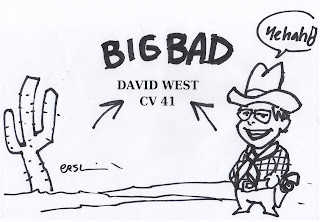 Gary Erskine is a constant at the MCMs and always fun.
Friday was it's usual very slow affair, and really isn't worth a day off work.
Saturday made up for it though and Sunday was almost as solid, so overall we did pretty well.
MCM is under new management and there have been a number of improvements over recent Cons.
This time around the Stewards were much better organised and attentive.
I liked the way the professional comic creators were placed around the Comic Village so the punters looking for them had to wander a little, and maybe notice something of interest that hasn't had any involvement from Stan Lee.
Yep.
MCM is still a huge corporate monster of a Con.
It still attracts more people looking to spend £70 on 2 seconds and a signed photo from some extra in some Star Wars movie or other.
It still has loads of Cosplayers who just aren't interested in the source of the character that they are dressed as.
But, because it's so big there are still plenty of plenty coming around the Comic Village to see what's on offer.
I think it's trying to raise the profile of Comics and it's not doing a bad job.
The rest is down to us to produce quality comics, engage with browsers and look to build a reader base.
Can't really ask for much more than that.
Posted by Dave West at 05:32