Second Comic Con of the year.

Accent UK have just booked a table at the Birmingham MCM event the weekend of 21st and 22nd March.
Hope to see plenty of you there.
Posted by Dave West at 12:49 No comments:

First Comic Con of the Year

Yesterday I was at the True Believers event in Cheltenham. I missed last year and the year before that had been at a different venue (the Racecourse) so I wasn't sure what to expect at the new Jury's Inn location, or where it was exactly.
It all went to plan however and the only mistake I made getting there was actually taking the wrong road off of the roundabout that the Jury's Inn hotel nestled against.
Easy to set up with great help from the Agents (helpers), I even had time for a coffee before doors opened.
It was a very slow start for me.
The people who stopped at the stall were happy to chat and find out more about our books, but very few actually bought any. They all said they'd just arrived and wanted to check out the other stalls first. This, as frustrating as it is, makes complete sense.
I had some time to catch up with Gustavo Vargas, Russel Mark Olson and the guys at Mad Robot. I also met up with Gareth Sleightholme and had a good chat about...well.. comics.
The good news was that the people who had spent time chatting with me earlier pretty much all came back and bought stuff.
The great news was that I sold a few copies of my new book, I before E except after W, that's Weird.
All in all it was pretty good Con at the end of the day.
It was fun and great opportunity to catch up with friends but also worked financially.
I of course bought some stuff myself... 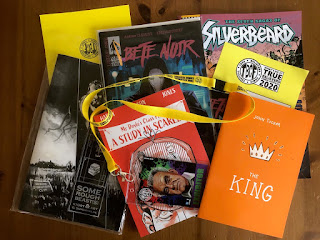 and just couldn't resist the opportunity for a Dylan Teague Convention Commission of Jigsaw Girl. 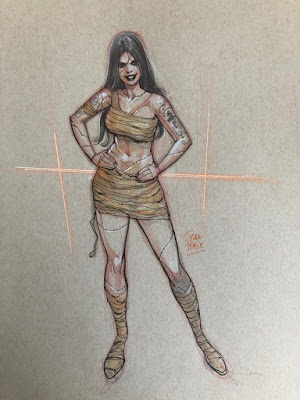