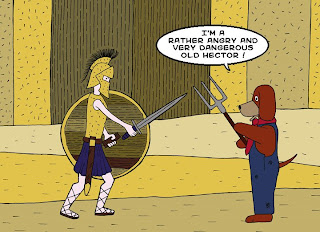 I always find I'm laughing to myself whenever I hear the name Hector used to describe a famous Greek hero. I mean ... Hector ... come on ... shouldn't a hero of Greece have a name that ends in 'us' or 'es' ? Wasn't Hector just a dog who lived with a cat and next door to a lady frog ?

I thought it was just me but then having recently watched the Troy film with Brad Pitt and Eric Bana (as Hector) I was commenting to a friend at work on the fact that I actually quite enjoyed it ... and it was he who said ... Hector ... I always think of Hector's House when I hear that name ... so ... it's not just me then ... I was never a true fan of Hector's House but watched a few episodes when I was young and I've obviously been psychologically scarred ever since ... 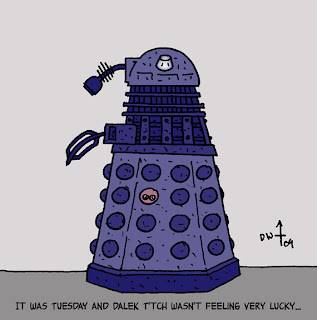 Had an email through Facebook from Andrew Cheverton ... not really sure what it's all about by Andrew was encouraging us to have a go at drawing a Dalek ... so I quickly pulled this together ... now I need to work out how to respond to Andrew's posting .. with the image included ... sometimes I feel left behind by it all ... sigh.
Posted by Dave West at 13:18 2 comments: 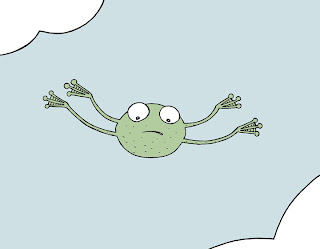 It's been a busy few weeks, and I didn't really see myself actually doing any drawing until the middle of June. Little did I know however that on accompanying my daughter's class (well some of it) to Granada (Spain) as the responsible male adult (well .. two out of three ain't bad) I would find myself drawing 'Falling Frogs' for Spanish 9 year olds.

The idea of the 4 day trip was to visit a Spanish school, give the British kids a chance to mix and speak some Spanish, by attending a class. So the kids were split into groups of three and an adult (typically a teacher) would then accompany the group and spend the day with them in the class with the Spanish teacher and 30 odd Spanish children. I accompanied three of ours as we were taken into a Year 3 class.

All was going pretty well until they started showing me their English work books. I commented on how good they looked and handed them back after flicking through and picking out the odd word or image in each for special mention. After a while one of the kids pointed out that the teacher from the previous visit had written something and drawn a little rose on the page. It looked like she expected the same from me. Hmmm ... 'Would you like me to draw in your book ?', I asked (in English I'm afraid) .. to which the girl, with a very serious little expression, nodded.

OK ... what to draw ? ... something that I could do standing up .. with school pencils ... Ah .. 'The Falling Frog'. I set to work ... and after about 5 minutes had a decent little drawing for her with the words 'A falling frog' written under it. She seemed pretty pleased and went back to her desk ... I sat in a chair to one side and started looking at the posters etc on the walls ...

A short while later another girl come along with her book and said something about 'rana' which my biology days informed me was probably 'frog', so I set to work in her book. Half way through her little sketch I looked up to check it was what she wanted and was startled to see pretty much the entire class stood in a queue behind her. All with their English work books to the ready .. this must be what it feels like to be a proper artist at a comic convention. Well ... I got the rest to return to their desks, so I wouldn't get in trouble from their teacher and then went around after finishing the drawing I was working on. As I finished each one another child would rush over to get their's done .... I must have drawn about 20 falling frogs in all.

I was tempted to change the drawing to a Robot half way through, but was worried that I much get some of them coming back for that too.

I've no idea what their teacher made of it all ... I guess she thinks all Brits are a little strange now. Probably not too far from the truth :o)
Posted by Dave West at 01:31 2 comments: