An evening with Mr Benn.

So, it is probably common knowledge to those who know me that I'm a bit of a David McKee fan.
It will come as no surprise then that when I learned that the man himself would be appearing at The Illustration Cupboard in London's Bury Street (No. 22) I penned it straight into my diary.
I was reminded nearer the time, not that I needed it, by the cover of The Big Issue (and picked up two copies, one for me and one for Mr McKee should he want it). 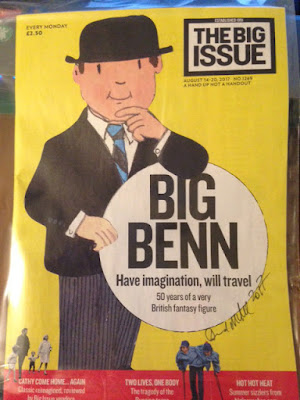 When the day arrived, as it typical at the moment, my work day took me right up to 5.30pm, meaning I'd have to move it if I was to get there and enjoy the evening, without arriving in a big sweaty mess (it was another very hot and humid day in London). As luck would have it the last meeting of the day was cancelled and so with  some of my McKee collection in a bag I dashed out of the building as soon as the slow office clock reached 4pm.
And there he was.
The man who produced Mr Benn, amongst many other great characters from my childhood. It was a healthy queue of people aged from about 6 to 60.
When my turn arrived I produced a Buttons comic, two of my old Mr Benn books (one from a library (how did that happen ?)), a Buttons comic annual and a Big Issue (or two). 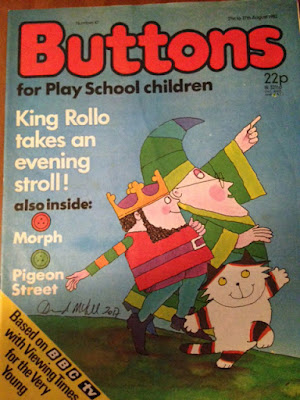 By the time I'd reached the table I'd also picked up a couple of Melric The Magician books and an audio CD of the Mr Benn theme tune. 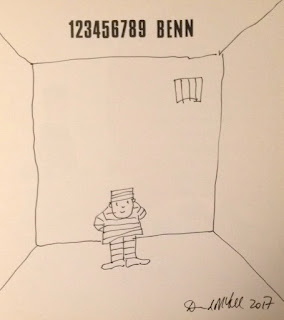 Whilst David signed, and more importantly sketched, each book I asked him the question that had been on my mind for too many years to count.
Keeping my cool I asked David about Mr Benn.
'Why had it stopped so soon ? Why only the one TV series ?'
'The studio chiefs weren't interested in a second series of Mr Benn, believing that viewers would think the second series was a repeat airing of the first', he told me.
And with that David had moved onto other ideas he had.
A shame, but maybe that's part of what makes Mr Benn so special.
Condensing the magic down to so few books and a short series.
Anyway ... it was great speaking to the man who had inspired me so much, and still does.
I don't think I gushed.
I think I kept my cool.
ps. Nobody else had the cheek to sit next to him for a photo.
pps. He was thankful for the copy of The Big Issue.
Posted by Dave West at 15:29 2 comments: