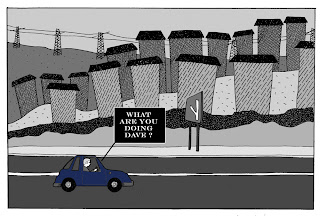 This weekend I helped out at a Scout Camp. It seemed only fair that I chip in as my daughter is a member and gets a lot from these weekends camping out, climbing walls and all sorts of other activities. Scout Camps however, are notoriously hard to find. I guess if you can't find the camp then you don't deserve to be a scout ... anyway ... I was never a scout and so I don't have an 'orienteering' badge but what I do have is a Sat Nav.
The Sat Nav didn't let me down and where other people had ended up getting lost down single car width, pot hole ridden, tracks I got there without much of a problem ... OK ... we did have to turn around once or twice ... but no scratches were collected and no parts of my car now litter the country lanes outside Stockport.
Coming home however I had one of those moments when something happens and your mind is taken to a completely different situation. I had decided to try to switch my Sat Nav off ... it had taken me back to known territory, so although not quite home I now knew the way.
It didn't want to be switched off however and kept trying to take me to another motorway. I half expected it to start speaking in HAL's voice from 2001 - A Space Odyssey.
'What do you think you are doing Dave ?'
'I'm switching you off ... I know where I am now'.
'I'm not going to let you do that Dave'.
.. anyway ... I didn't want to stop the car and work out how I could be pushing the wrong button ... there is actually only one, and if it was anything like the film then it would have tried to stop me anyway ... so I listened to it all the way home ... eventually it realised that I wasn't going to go back to a motorway and started giving me the correct directions.
It did get me wondering though ... if we did have to persuade all of our little helpful gadgets to be helpful ... if their programming did fail .. or .. rewrite itself ... we do tend to rely on these things a little too much. A few generations down the track our decendents will be all the more dependent ... and maybe all the more at risk.
Posted by Dave West at 12:03 2 comments: 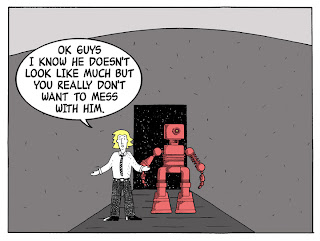 Back in 1951 Robert Wise made the inspired The Day The Earth Stood Still. It had it all. Iconic robot Gort, strange almost-but-not-quite human Klatu and a message that played to the fears of the time in which it was made. Wonderful.
So why of why did they decide to remake it in 2009 ? I've read nothing good about the new version. I refuse to give any of my hard earned cash to support this sort of thing. There are a hell of a lot of good books out there just crying to be turned into a movie, so why not do one of those ?
I didn't see this at the cinema and now it's come out on DVD I've decided to give that a miss too ... maybe I'll be tempted when it's in the £2 bin.
Posted by Dave West at 12:47 5 comments: 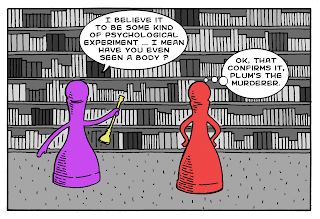 I was playing Cluedo the other day, my daughter loves it, and it suddenly occurred to be, as we were all rushing from room to room .... had anybody even seen the dead body of the so called Dr. Black ? Was this in fact all some elaborate plot to have a group of friends turn on one another ?
As we were informed from the offset that one of use had murdered Dr. Black ... wouldn't we eventually find one of us to be guilty ? Whether they actually were or not ? ... I mean ... our fingerprints would be on most weapons ... our footprints in every room and corridor ... no ... I think it's all some kind of test ... and I refuse to be a part of it !