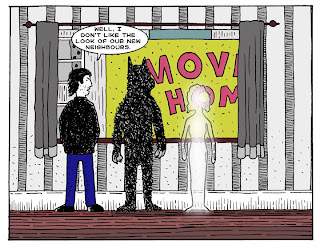 This BBC 3 series had been recommended to me by a few people, but I was still recovering from the mess that was the ITV series Demons, of which I survived a whole episode, and so avoided it. For a while anyway. Then I found myself reading the back of the DVD case in a local 'DVD and Music' Emporium and .. well .. it sounded interesting ... next minute I was walking out of the store with it in a DVD Case sized little bag.


I watched the complete 6 episode series over the next three evenings ... and ... well it's not that bad ... in fact it was quite good. I wanted it to take a darker deeper and less predictable direction, but the direction it did take was actually far better than many that it may have selected.
So, you have a house that is shared by a Ghost, a Werewolf and a Vampire ... what could go wrong ? Each episode tends to focus on one of the main characters, so we get to learn how they came to this point, but even the 'origin' stories were done in an interesting way.


Understated, as are most British dramas, we had the usual 'bad guy with his big plans' but this bad guy wasn't your all powerful demon, but merely one of the head vampires .. and he was a 'manipulative' rather than 'rip throats out' kind of monster .. although he did that too at times. Yep ... I've put this on my 'keep' pile and am looking forward to season 2.
Posted by Dave West at 04:13 3 comments: 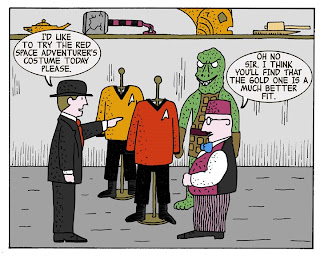 Well, I've seen a couple of trailers now and I'm convinced. The new Star Trek movie is going to be great. I grew up with Star Trek ... and I mean the original series ... this film has every chance of resurrecting the whole franchise, not that I thought Enterprise was bad but interest in the whole Star Trek universe has diminished series by series until the current all time low. Another childhood hero of mine was Mr Benn ... and so it seemed appropriate that I combine the two in a little cartoon.
If you don't get it then ask someone who would know what wearing a red jumper meant to anyone beeming down to a planet in the original series ... and The Next Generation for that matter ...
Posted by Dave West at 10:00 8 comments:

The chapter title pages for my little Strange Times book. 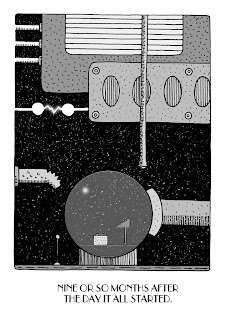 Well, the Strange Times story, yes, there is a story here, moves back and forth through time a little and I needed to come up with something that'd work for the image on an otherwise quite boringly sparse chapter title page. I must admit to struggling with this until it occurred to me to use an image of Samuel Close's Time Machine itself ... showing the passage of time by showing the stages of its development. I must say I'm quite pleased with the end result ... or initial result ... hmmm ... that's the trouble with time travel I guess .. one paradox after another.
Posted by Dave West at 14:22 No comments:

When will we ever learn ?

I'm always surprised when I see reports of man playing with the natural balance of things. There are plenty of examples where man has moved a certain species from one continent to another in order to solve a problem, or merely for sport, and the result has been disastrous.


An example of this is the case of the Wild Pigs Of America. The U.S. government estimates that there are more than 4 million wild pigs scattered throughout 40 U.S. states. These pigs were introduced into America by Hernando de Soto in 1539, then hunting enthusiasts released German wild boars into the wild in the 19th century, and Russian wild boars were released across several southern states in the early 20th century. What seemed like a pretty good idea at the time has resulted in an ecological disaster, with the pigs devouring huge amounts of crops, tearing up plants, and driving out native wildlife by outcompeting them. The problem is so bad in some places that there are actually federal teams of hog hunters armed with machine guns, which is probably seen as great fun by the guys with the machine guns. The problem is that the pigs have no natural predators, other than man, and so they are able to spread quickly. Not only that, but they may spread disease to humans, as well as livestock and pets. Yep ... a complete mess caused by man.


So, what's the story with Cane Toads then .. oh ... Cane Toads were introduced into the sugar cane growing state of Queensland in 1935, to combat the cane beetle, a pest of sugar cane crops.
However, as the toad is not native to Australia, it has no predators, and has since spread across most of Queensland and almost entirely across the Northern Territory, including the world-renowned wetlands of Kakadu. You see there are plenty of creatures who will eat it, but none who can survive its poison and live to eat more.


Right. So, here we are talking about introducing 'Meat Ants' into Australia (New Scientist Apr 09) in order to control the spread of toxic Cane Toads. The ants aren't affected by the toxin and so the toads are fair game.
Once the population of Toads declines though and the Ant numbers increase, won't the Ants go looking for other prey ... hmmm ... sounds like more trouble to me. Best check that the Meat Ant has a predator in Australia before you introduce it huh ?


Does this remind anyone else of the old story about the Old Woman Who Swallowed A Fly ? 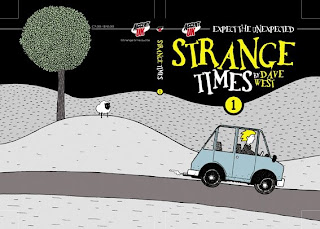 Well, it's getting close now. My little webcomic is going to be printed on paper and collected as a little hardcover book. Andy Bloor (who did the blog banner above) has taken my simple little cover design and worked his wonders on it to produce this great wrap around image of Samuel Close going to work (see above) ... I've about 5 pages of art to do ... collect some pin-ups, write an introduction or something similar ... and then ... get it printed .... I'm really looking forward to getting my hands on this. I may of course be alone in that .. but hey ... I care not :o)

Following a recommendation from Andy Bloor, I picked up the first issue of the second series of Locke & Key, and am hooked. It's great when you discover something new, that already has a bit of history, as you can then seek out previous issues and works by the creator. Joe Hill the writer of the comic also writes books without pictures, and a quick visit to my local Waterstones scored a hit on both counts. So I was in possession of the hard back collection of Locke & Key series 1 - Welcome to Lovecraft and also his horror book The Heart Shaped Box. As it was the former that hooked me in the first place I started with that. It's really very good, and startlingly it's his first comic work I believe. Great characters, character development, well paced, well written (not just formulaic story telling), an interesting story set in an even more interesting environment (the mansion is fabulous with its history and secrets) ... with a back story that is there just waiting to pounce. Can't wait for the second collected volume. Whilst I'm not a big fan of horror I really enjoyed The Heart Shaped Box too. An intriguing idea again, and again great characters develop through the story through a number of twists and turns until the end ... which I thought I'd worked out but happily was wrong about. Recommend you look this up if you get the chance.

A pill to treat the healthy.

I read in the New Scientist (4th Jan 09) that they've now invented a pill to prevent a number of possible illnesses from occurring, and are praising the fact that they can squeeze all of this into a single tablet. Maybe I'm being a cynic but is this just the pharmaceutical companies trying to squeeze more money out of society. Have they 'maxed out' on profits from people who need medication and are they now turning their attention onto relatively healthy people ? Seems that with the first pill it will replace three or four others, but taken to its extreme it occurred to me that it'll end up as one huge pill if it's going to cover all of the bases.
Posted by Dave West at 13:29 2 comments: