Whatever Happened To The World's Fastest Man ? 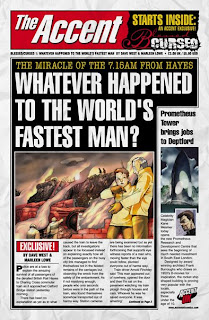 Kind of broken my own little rule for this blog as this artwork hasn't been created by me ... but I did write the story .. so I'll let myself off .. artwork is in fact by Marleen Lowe.

The reason that I've put the cover image up for our ''Whatever Happened To The World's Fastest Man'' colaboration is that we've now got two reviews ... and both give it 10 (out of 10) ... I can't stop smiling :o)

Pop over to Accent UK Comics website (http://www.accentukcomics.com/) and follow the REVIEWS link from the ''Whatever Happened To The World's Fastest Man'' page (just click on the cover image on the home page) to read the full reviews.

I'll be sending a hidden link page to the full comic to a number of REVIEW websites over the coming weeks ... try to raise its profile before talking to Diamond Distribution about listing and hopefully shifting copies of it.

Three things must you know .... 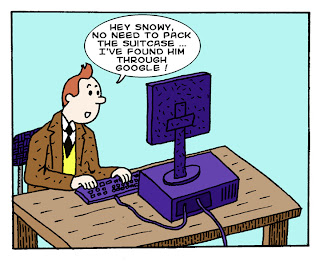 Last week I saw one of the real benefits for the World Wide Web.

I'd lost contact with a good school friend some time ago and despite joining Friends Reunited I've had no luck tracking him down. OK, I guess I could have tried a few more things but at the end of the day I'd no idea if something had happened to him or whether life just got in the way but I stopped getting Christmas cards and the like some 10 years before.

Then I decided, following a suggestion from a friend at work, to try and Google him. Well .. he did have an fairly uncommon name, I knew he worked in 'electricity' and I knew he was based in the South East of England ... well ... the latter two were true 10 years ago anyway. So, armed with these three pieces of information I tried it.

On the first Google page was a link to a website from one of the major electricity suppliers ... based near Bexleyheath ... OK ... maybe I'd struck lucky.

I emailed the guy with an, 'I've lost contact with an old schoolfriend' email ... and waited.

And didn't have to wait long before I got a reponse.

So ... the internet does have it's uses after all.

But with every silver lining is a cloud and now I worry about the livelihood of all those private detectives who used to pay their bills with missing persons cases ....
Posted by Dave West at 11:26 4 comments: