It started with an email from a good friend of mine from my time working at the Co-op.
Neil Morrow had a spare ticket to an American Football game at the Wembley Stadium.
I was into American Football way back when they used to show it on Channel 4 and it's a game that I've always wanted to experience live.
It always seemed such a great experience. An event that was bigger than the actual game.
'I'm interested.' I replied, 'Who's playing?'
'Miami Dolphins vs the New Orleans Saints'
Wow. Miami Dolphins were my favourite team way back then. Dan Marino being the star quarterback, if memory serves.
'Hell yes.' I was up for this, even if I knew I'd be feeling really tired from travelling back from Glasgow the week before and also that I was going to Chichester, and back, on the Saturday. 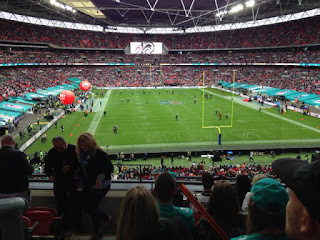 And there I was. Sat watching the screens show off cheerleaders and interviews whilst Pepsi cola T-shirts were being shot into the crowd by girls in costume surrounded by men bouncing around on those stilt things.
And the game started. 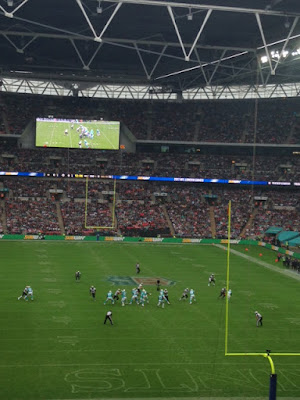 I still remembered the rules and the first quarter was quite tense, with Dolphins almost getting a Touchdown in their first drive.
Sadly this was as close as they got all game and where overwhelmed by a stronger New Orleans team. There were more penalty plays than I ever remember seeing on TV, maybe the rules have changed a little as they have with our own football where you can earn a free kick these days from falling down when someone looks at you.
I enjoyed the spectacle, and the way that 4 * 15 minute Quarters game time resulted in about 3 hours event time. It was never boring though. Something was always going on, whether it was the man in a Dolphin suit who ran around and engaged the crowd (which took me back to the Simpsons episode when Homer had gotten the job of Team Mascot) or when one of the stewards on the pitch got a decent Mexican Wave going. 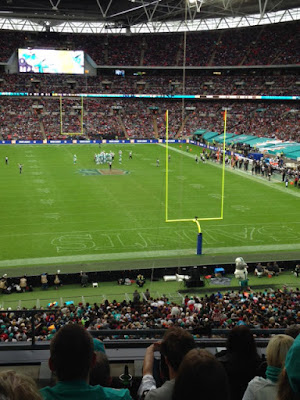 An enjoyable day, despite the poor Miami Dolphins performance, and something I can tick off of my Bucket List.
Thanks for thinking of me Neil when the ticket became available.
Posted by Dave West at 13:54