For the first time in recorded history the Accent UK team was split across two Cons.
The A-Team (that's any team that includes me, and this time was with Jemma) were at the Glasgow MCM and the B-Team (which is any team that included Colin, and on this occasion included Gary Crutchley and our guest from Denmark Martin Flink) were at Thought Bubble.
Of course there was a competitive element to the whole thing, although I'll confess that I was doubtful of my chance to win. Added to the international guest there were two new books at Thought Bubble that I'd not managed to get hold of, WesterNoir 8 and Martin's The Lizard.
Still, I do love a challenge.
This year then saw us on the table next to Steve 'Timebomb' Tanner.
It's amazing that in his 10 years and our 15 this was actually the first time that this had happened. 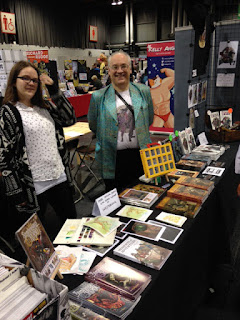 We would get a chance to see the Sales Master in action.
He is quite impressive and soon we were both busy talking to customers and swapping cash for comics as is the traditional way of things.
Saturday was very busy and an improvement for us on last year which had been relatively quiet. The Lego figures drew in a lot of interest, but sadly it was mostly under 10 year olds and none of the comics that the characters they saw in Lego form were suitable.
A poor marketing strategy then.
There were, as always, plenty of Cosplayers to marvel at.
My particular favourites were... 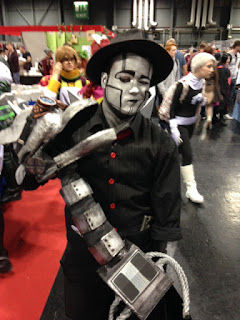 Spike from Steampunk Giraffe and... 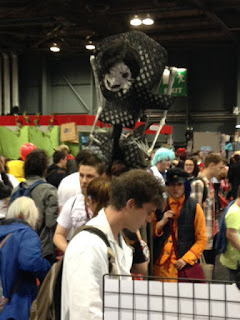 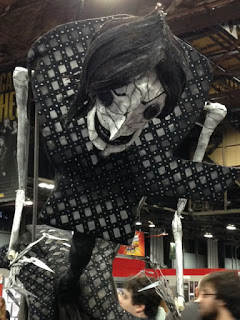 this from Coraline. Amazing.
A good day ended with a really enjoyable night at Babs (Kebab restaurant (thoroughly recommended) with Mikes Garley and Stott, Jemma and Jenika and Steve Tanner. Great food and great company.
Sunday, whilst starting slower, was another good day.
Did I beat the boys at Thought Bubble ?
Well ... not on total number of Comics sold.
But ... wait a minute ... they had two tables and I had only the one.
So if you take the sales per table, which seems only fair, then I won by a country mile 😂.
I'll leave you with this...