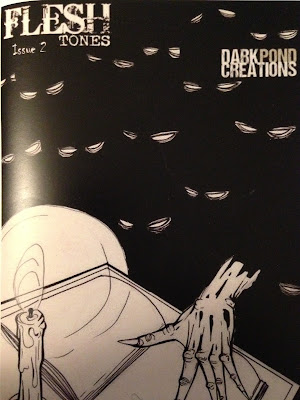 I'm not a big fan of horror comics.
I mean real gritty and grim horror comics where people get their throats ripped out by come creature who lives just to rip people's throats out.
And so I've never really been drawn to the comics of Dark Pond Creations.
They're not my cup of tea.
Talking to Patrick Scattergood, the driving force behind DPC, at this years Nottingham Comic Con however I was struck by the fact that one of the tales in issue 2 of FLESH was a more personal story from Patrick. One about his battle with depression.
I bought a copy.
The first two tales in the comic then are what I expected and although well written and illustrated I found myself passing through them pretty quickly before arriving at The Black Dog In The Night.
It's a personal story expertly illustrated by Luke Cooper about Patrick's fight against The Black Dog, depression. A real horror that confronts too many of the people around us. There are some really subtle touches to the artwork, the thin scars on the wrist for example, that add to the realism. A powerful tale all the more horrific because it is very real for so many. 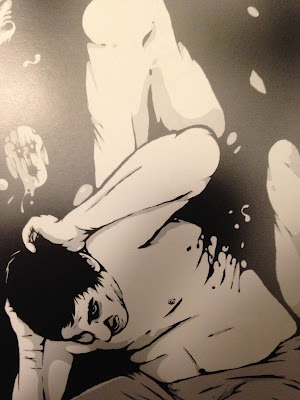 I'm not a big fan of horror comics.
But I'm a fan of stories like this.
You can find Dark Pond Creations on Facebook.
Posted by Dave West at 14:22