We'd been to the Belfast MCM event since it started, which is two years now, and we booked this without realizing that it was no longer in the outskirts of Belfast but actually had moved to the sight of the old Maze Prison in Lisburn. The new Eikon centre.
OK, so this was a risk.
Would people travel all the way to Lisburn to buy comics and take part in an event that was clustered with a number of others in the local area ?
We'd not been confronted with the old 'How many comics can we take within the luggage allowance; for a long time and the last time there had been three in the group, this time it was just me and Colin.
We did the best we could and at the airport both suitcases came in just below the weight allowance.
All good so far then.
Colin, as always, had planned how we'd get to the venue and we'd decided to go straight there on the Friday, offload our stock and then walk to the hotel and check in. On paper it was only a 3 mile walk, and with the bags being comic free it didn't look too much of a problem.
So.
Plane from Manchester to Belfast.
Bus from airport to Belfast City Centre.
Train from Belfast City Centre to Lisburn Station.
Taxi from the train station to the venue.
All seemed straight forward enough.
And it was, until we reached Lisburn Station, which had no eager rank of Taxis waiting to ferry us on our way.
Not a big thing and something I had thought might be the case. So, dragging our suitcases (good job they come with wheels these days) we set off looking for a taxi service.
We passed one that had closed down but eventually found one, and the 40 minute wait was spend in the pub next door, where we chatted to some very friendly locals, once we clarified that we were not in fact 'comics' but a couple of blokes who made 'comic books', it's a recurring problem and I've no idea why people look at me and think 'comedian'.
The taxi took us to the venue, which we discovered was the sight of the old Maze prison and we also discovered that the venue, as nice as it was, was sat on its own in the middle of a large expanse of waste land. With no trains, bus stops or helipads (for special visitors).
This didn't bode well.
Still, we decided that we were here now and might as well make the most of it.
We also noted on the way in that the local roads were very narrow, surrounded on either side by hedges and no footpaths. We would have to get a taxi to and from the venue every day.
Saturday then saw us set up nice and early and wonder if anybody would find the venue, let alone find us. 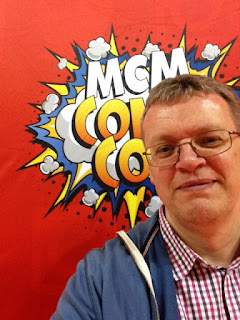 Our friendly neighbourhood organizer told us about the shuttle buses that had been laid on from Lisburn Station and also the reasons for the choice of venue, which all made some kind of sense.
But still we worried.
And then the doors opened and people came in. 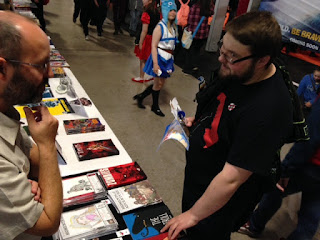 Yes, people had managed to find the event.
It started to get fairly busy. Not London or Manchester busy, but there were enough people there to give it the usual MCM atmosphere. and we started to get people at the table interested in what we had and some who'd bought stuff from us last year and wanted more.
We had a decent Saturday and agreed that if we did as well on Sunday (which was possible) then we'd have done OK.
We agreed to share a taxi back to the hotel with  Gary Erskine and also walked down into the village to meet up with Jenika Iofredda and Moonboy (as we call him) and find someplace to eat.
All of this was set against a backdrop of the Brexit vote and Ireland playing in the quarter finals of some European football championship.
Let's just say it was lively.
A really enjoyable meal where we were later joined by one of Gary's Cosplayer friends in a very safe atmosphere (I think the pub full of English fans watching the team lose would have been a little more... worrying), made for a great night. The walk back up the hill to the hotel clearing our heads a little. 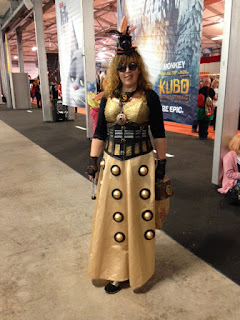 Sunday was slower than Saturday but we did manage to sell about the same number of books in the end and so overall the Con was good enough for us to revisit next year.
The venue was a little far out but it turned out that made it easier to get to by car.
The shuttlebus were constantly moving people to and from the event and I think overall pretty successful.
The attendance felt about right.
We had a very enjoyable time and met some really nice people.
Yep, we'll be back.
Posted by Dave West at 14:54