The last Convention of the year.

You may have got a sense of it from reading Convention reports on this blog, 2014 has been the best year yet for Accent UK.
We've made record sales at Conventions and our on going series WesterNoir has really begun to gather more and more readers with each Con we do, as well as bring existing readers to the table to pick up the latest instalment.
Before WesterNoir however Stephenson's Robot was going to be our first on going series, well a 7 issue mini-series, and it's a very ambitious project for us which meant it has taken longer to get to print. But it did. And Thought Bubble saw it on the Accent UK table in all its splendour. 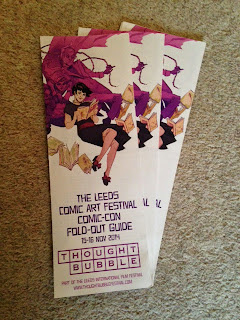 It's a very different book to WesterNoir and there's always the slight concern that readers of one wouldn't naturally be interested in the other.
So, with two new books and one of them, Tales Of WesterNoir, extending an existing series, we felt well placed to do well at this Convention too.
Driving over and setting up the morning of the first day of the Con is nothing new to us and we made it in plenty of time for 'doors opening'.
We were joined once again by WesterNoir co-creator Gary Crutchley (and you can read his report over on his blog) and Scott (Colin's son), so we had enough cover to allow us all to take time out from behind the table and wander around. 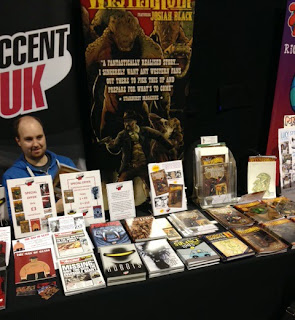 It was great to bump into Bridgeen Gillespie again after so many years and I of course picked up her great little collection of short stories, Flash Fiction.
This year we had Andy Bloor on his own table sat next to us, selling his own self published book Midnight Man. It's a very different book to Wolfmen, being written by Mo Ali and is a frantic fast pace actioner from beginning to end. It looks great with Andy's moody style jumping at you from every panel. 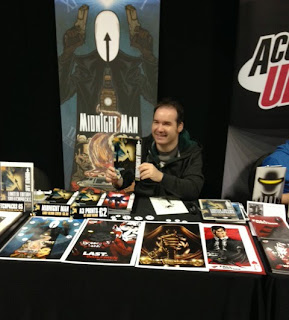 The organisers of Thought Bubble had changed things once again, this time adding a large Marquee to the square sat between the Main Dock hall and the Armouries. And it worked really well. This then was where most of the professional guests were sat and this is where the fan boys queued for signings and sketches. I was one of them for a while and spent a nice half hour chatting with Brian Hurtt as he drew a great sketch in my collected The Sixth Gun. We handed him a copy of the WesterNoirs as a thank you. 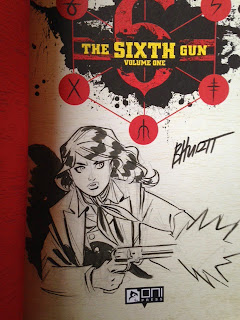 A typical slow start soon turned into a busy day, with repeat customers, Facebook friends, new customers and interested folk coming in waves.
WesterNoir being very well established now got the most interest but Stephenson's Robot had more than its fair share of sales as people were drawn to INDIO's wonderfully crazy artwork. It really is a gem of a comic.
So, by the end of the day we realised this was our best Thought Bubble ever, and that we'd already sold more books than we had over both days last year.
A nice evening spent talking comics over a burger and beer, and it was the perfect end to a great day. 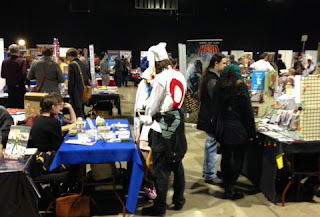 Sunday started slower than Saturday. it always does, but unlike previous years, rather than sell half as many books over the day we actually sold nearly as many as we had on Saturday.
This was turning into one of our best ever Cons.
All books sold well but newer books sold better than the others, which is to be expected.
The Tarot Card edition of Stephenson's Robot went down well, as hoped, and we'll certainly continue producing a new card with each issue. 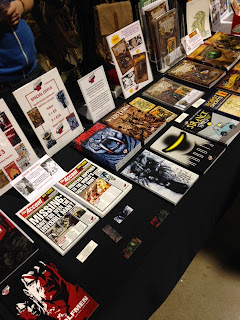 Andy Bloor, next to us, also had a good con with plenty of sales.
So, all in all it was a great two days and certainly just what we needed to keep us energised over XMas to continue working on the next issues of WesterNoir, Tales Of WesterNoir and Stephenson's Robot, as well as a number of other projects.
Posted by Dave West at 04:16