This week was the week of my 'Leaving Do'. Tuesday night I was picked after getting back from work and taken to a local pub where a lot of the friends I'd made over the last 24 years where waiting to see me off.
It was a really enjoyable, if a little sad, evening chatting about the past and the future, and having the odd beer.
I noticed one the guys, Mark, enter the pub quite early on with a huge wrapped picture frame under his arm. And I started to worry. Was my leaving present to be a huge aireal photograph of the building I spent most of the last 24 years working in ? Would I have to bring it out and hang it up whenever anybody called around ? How good would I be at looking pleased by the gift when presented with it ? I'm not a great actor.
Imagine then my delight when I unwrapped this... 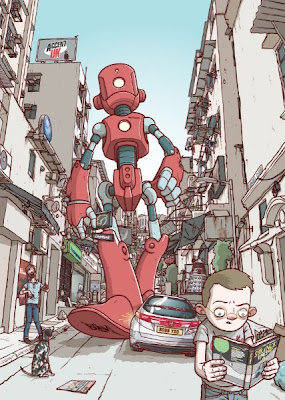 They know me so well.

People get to know a lot about you when you've worked with them for such a long time, as the references in this picture show, and whilst it was Mark Dodgson who had had the initial idea and sorted most of it out, I can see that a lot of people contributed to the content of the image. It'll be hard for you to spot some of them on this very small version but there are plenty in there, and I keep finding myself studying it. It's fabulous.

The artist is known as Hammo, I've added a link to his blog on the right, and he can certainly draw a great robot ... and 'Yes' .. that's a young Dave West reading a copy of Strange Times and 'Yes' that's Bobby Doyle on the rooftop.

The other great thing to happen this week is that The Fall Of The Wolfmen has been nominated for an EAGLE award. As with previous years the first round of voting is merely to get the list down to a shortlist of 5 entries in each category, and the final date for this is the 7 March. then from the 17th March the voting starts again where one of the final 5 will be the winner. It's a little bad timing for us as the comic has only been seen in the UK so far, apart from review copies sent out, but hopefully the comic will hit stores across the globe before that date, we'll check our Diamond shipping details.

Also, it's great to see the Tales From The Parent's Basement podcast listed, it's a great comics podcast run by guys how just love the media, and happen to be really nice blokes.

The Man Of Glass wasn't on the list for Best UK Colour Comic, but I cheekily added it. If you don't see it by the time you go in and cast your votes then feel free to add it as well, but only if you really think it was better than the others on the list.

And here's my request ... please don't vote for our books out of friendship, please only vote for those books you really think were the best. That's where this system is flawed, but it's all we've got so let's respect its limitations and not take advantage of them. Thanks.

Oh, the link to cast your votes is www.eagleawards.co.uk.