Going Up and Falling Down.

This week I put the final greyscale touches to a short story called 'Book' that has been illustrated by Steve Holder. This will form part of a collection of short comic strips that will come out later this year, in a little hardcover book called Robot Shorts. Steve talks about this strip over on his blog.


As is always the case with me at the moment, a lot of things seem to come together in very surprising ways. Reading back through pages that I'd already lettered, changing bits here and there as I do, my eye was drawn again to this great image from Steve. 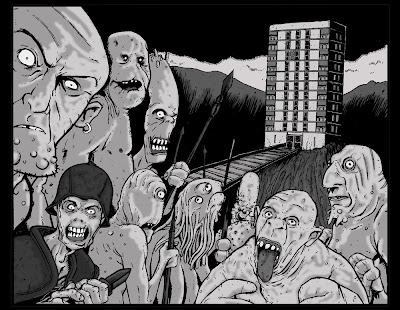 It reminded me of my youth, growing up in a block of Flats (Tower Blocks) in South East London, although the locals were a little less intimidating.

My new job sees me moving between two towers in the centre of Manchester, and I always seem to be having to go up to at least the 9th Floor in each. I therefore have to use the Lift (I'll use that term as it seems more British), in order to get to where I need to get to, at the right time, and sweat free.

I always feel a little seed of apprehension when I enter the Lift.

My experience to date has not been great, though far from catastrophic.

I'm not sure where this slight phobia comes from. I never had any real problems with the Lifts in the tower block of my youth. Sure I've heard some horror stories, but not many and none that I can remember in detail. So it was odd that this week's Desk Calendar had this advice on the subject. 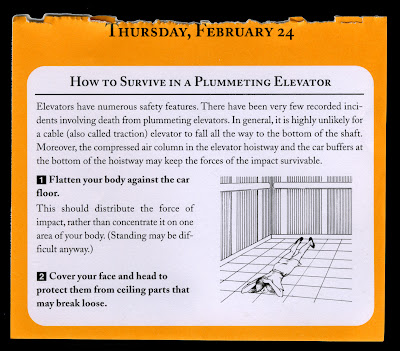 I'd always thought the best thing to do in a plummeting Lift would be to jump as it hit the ground. Easier said than done I know, but that's probably what I'd have attempted. Now it looks like the best thing to do is to lie down. I'm not sure how practial this advice is as there are usually about 10 people in the Lift and I don't really think that everyone would fit if they all tried to lie down in it. Should I be first in that case, or last ? Would it actually help at all ?

Maybe I should allow more time for my journey and take the stairs, a much healthier option for all sorts of reasons.