Bugs, and their part in our downfall.

The train pulled into Wilmslow station as it did every morning on its way to Manchester. It was a cold morning, causing even the hardiest of the waiting passengers to wrap as much of themselves as possible with scarf, hat and glove. And yet, with all that protection, the man who sat himself only two rows ahead of me sneezed as he allowed his body to drop into the seat.
With sitting in a train every morning and night I guess it's just a matter of time now before I too succumb to some flu bug or other. I had one only a few months ago, around Christmas as I recall, and yet I know that in the intervening months the little blighters will have evolved into something entirely new and overpowering. 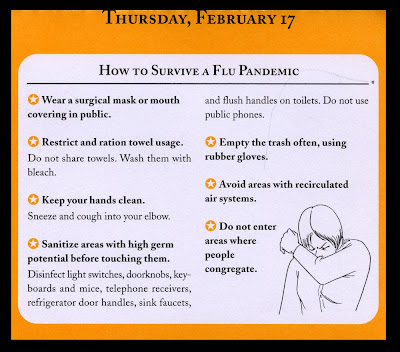 Strange then that once again the little desk calendar had some great advice for me.

The 'Do not enter areas where people congregate' is a tough one, as I couldn't imagine the pain of driving into Manchester every morning... well actually I can, which is why I take the train. 'Wearing a surgical mask or mouth covering in public' just isn't something people would do in the UK. It's just not... British. Maybe I could design something... no... I'd end up looking like someone dressed in a poorly constructed spaceman's outfit. 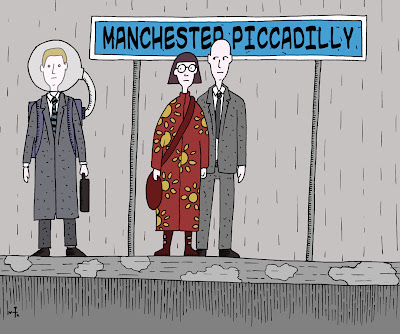 As I left the train, joining the hundred or so commuters as they set about getting into their workplace as quickly as they could, I wondered about the end of The War Of The Worlds. How the bugs (and by this I mean 'germs') had saved us by killing off creatures who had no natural protection against them. Had Mr Wells been prophetically warning us ?

Of course, I'm more of a 'glass half full' kind of person and so my thoughts quickly turned to the day ahead, and the realtive warmth of the air conditioned room in which I'd be spending most of it... Oh, isn't there somewthing about 'avoiding areas with recirculated air systems' in that 'How To Survive a Flu Pandemic' ?

This week, sat as I was amongst the germs on the Manchester boound train, I finished reading abook that Owen Johnson had sent me. A book he described as 'his favourite book'. A book that is very thick and pretty heavy. A book called 'The Amazing Adventures of Kavalier & Clay' by Michael Chabon. A book that is wonderfully written, engrossing, hopeful and sad. I can't remember when I've read a better book, and this one was actually about comic book creators as well. Set against the backdrop of the Second World War it follows the plight of the Jewish people as it observes events in Europe from the perspective of a man who has managed to escape, physically if not mentally, the fate of many of his people. I would recommend this book to anyone. It really is an excellent read.
It does trouble me though that just as I finish it, I'm pointed at http://www.bleedingcool.com/2011/02/19/this-kavalier-and-clay-animation-test-is-exciting-and-unexpected/ by Dan of Millennium Comics. I'm sure they must be talking about making an animated movie of the comic characters within the book, and are not trying to capture the story of the creators of the characters themselves. I hope that they are anyway. It would make a great movie, but would lose too much if reduced to animation.
The other book I finished this week was Revolver. This one had pictures and was written and illustrated by Matt Kindt. It's a great little tale about an otherwise typical man who bounces between two very different realities. I'll say nothing more about the plot, you'll just have to go out there and find yourself a copy. The harcover collection is very nice.
In other news, I've started an Accent UK blog for all future News, Diary and Event information, phase 1 of the Accent UK website upgrade. You can pop over and check it out at http://www.accentukcomics.blogspot.com/.
Posted by Dave West at 13:31

Labels: Tales From The Parent's Basement