Captain Marvel, better than some but not MCU's best. 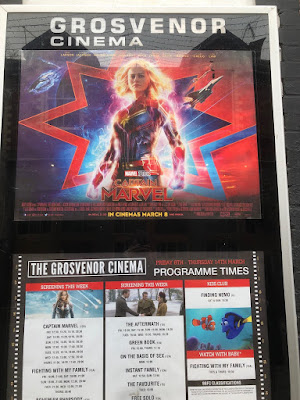 I took the opportunity, whilst up in Glasgow visiting my daughter, to go and see the latest from the Marvel Comic Universe at the cinema.
I chose, well actually it was near where Jemma was that evening, to go to a small independent cinema called Grosvenor in Glasgow's West End, off Byers Road.
There has been a lot of talk about this movie.
Much of its profile was due to some insecure males trying to destroy it before it even got a chance to be seen. Rotten Tomatoes took down the review / feedback page as thousands (or maybe a couple of industrious idiots with many accounts) gave it a terrible rating.
I was always going to see it.
I remember buying issue 1 of Ms Marvel (as she used to be known) for my sister way back (late 70's maybe) to try to get her into comics. I failed at that but quite liked the character myself and so always kept an eye on her development over the years.
Anyway, what did I think of the movie?
It was about middle of the Marvel Movies for me.
Not as good as Winter Soldier or Infinity War, better than Thor and it's sequel. Not as good as Thor:Ragnorak but better than Iron Man 2.
It worked well in the continuity of the other movies and being set in that universe's history allowed us to see some interesting moments.
It also threw in a few surprises here and there to keep the comic nerds, like me, on their toes.
Yes.
Enjoyable.
Not a classic but a very good use of an evening.
Posted by Dave West at 11:22