There are a number of little Comic Cons taking place in towns around the North West of England, and we worried that we might be missing out on opportunities to get our comics into the hands of new customers. 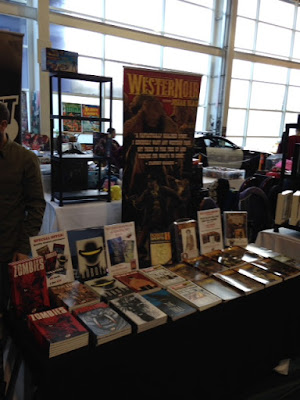 With this in mind we decided to try out the Bolton Comic Con.
It's not too far away, it's at an easy to find venue (the Bolton Wanderers Football Ground), the parking is free and close to the hall and it quotes decent attendance numbers. 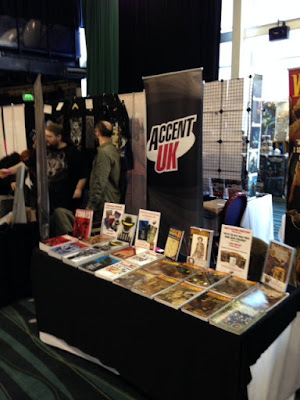 We arrived in plenty of time for doors opening, as always, and were set up in time to wander around the hall and get a feel for the event before the punters were allowed in.
It felt a bit like an MCM, although on a much smaller scale, and more 'fragmented'.
There was no Comic Village pulling all the comic stalls together.
In fact you could count the comic stalls on the fingers of one hand.
That could work for us or against us. 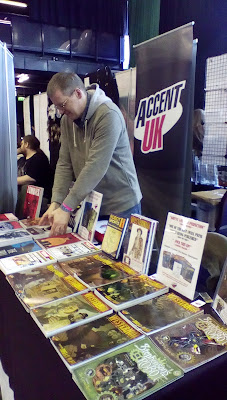 We were a little dismayed when the doors opened at 11am.
There weren't many people in the hall. It felt empty in fact.
The nice people on the stall next to us explained things though.
This was the Early Pass holders, the masses would follow.
And they did. 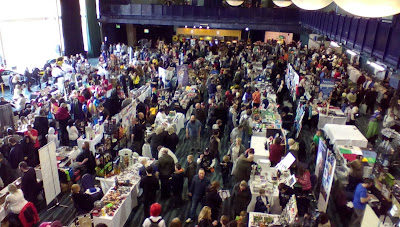 The strange thing was though that despite the numbers, people weren't really interested in looking at comics.
It was mostly young families wanting to experience the Cosplay and look at the toys.
Mr. Fudge did a roaring trade, and we sampled some of his cakes... which were very good, but sadly we didn't. 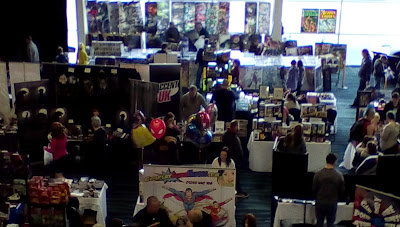 So, as the day went on we realized it wasn't a show for independent comics, and it probably wasn't a show for comics in general.
It was a great show for families to wander around and enjoy the spectacle.
We did sell some books and we made a great connection to the Gamer 2 comic and game shop, but it's unlikely we'll do another as our calendar is pretty full as it is.
It was also very nice to meet Natalie Gosney selling her interesting looking werewolf books, she very kindly gave me a copy of Wolf Born which I look forward to reading over the summer.
Posted by Dave West at 14:05