When we were approached by Maura Manninen at the last Copenhagen Comic Convention we were a little unsure. We'd struck it lucky at the Copenhagen Conventions, making a good number of friends over the years and also meeting a lot of very nice English speaking customers. The question was 'Would Helsinki be anywhere near as good as Copenhagen for us ?' 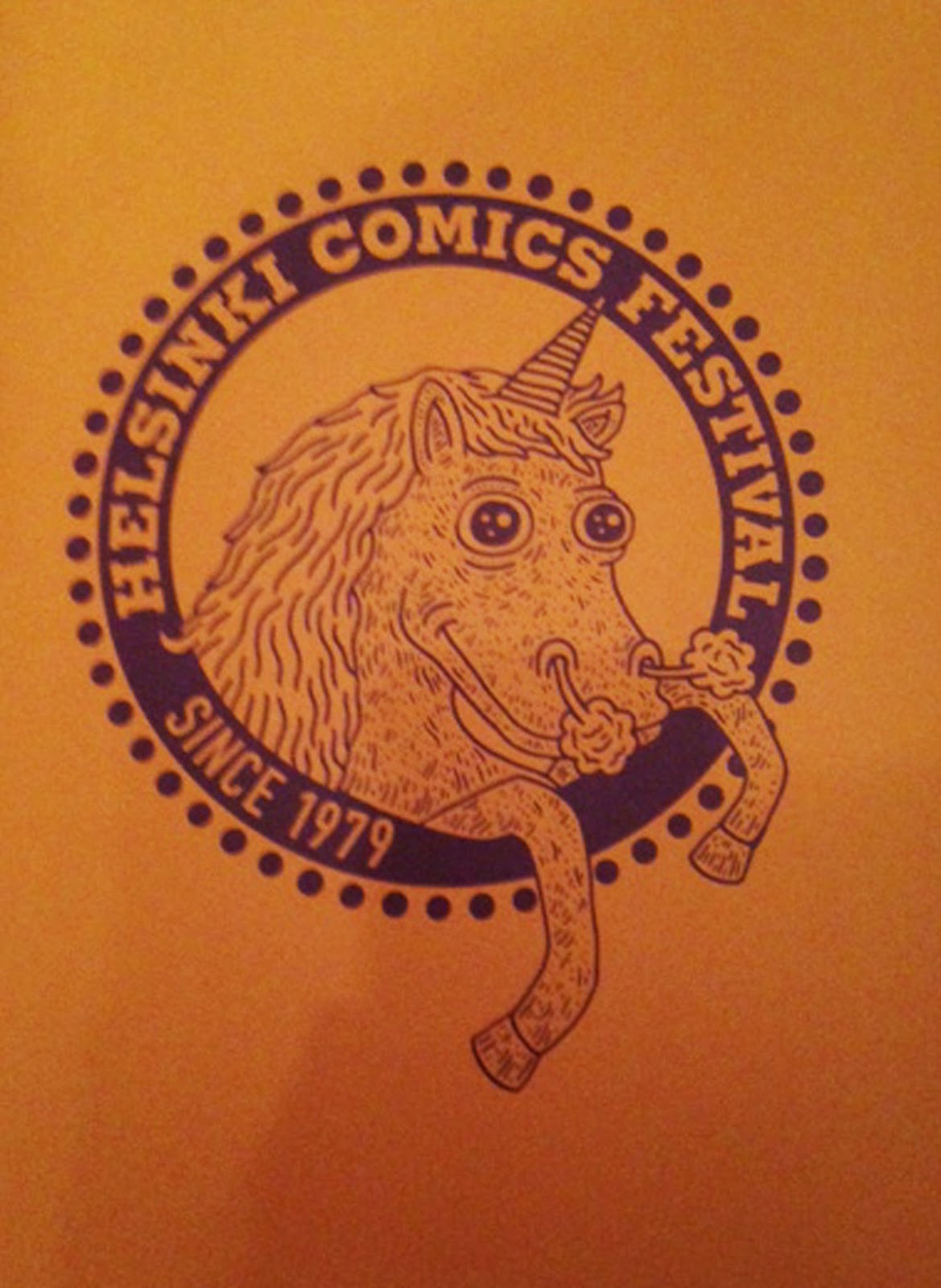 We're nothing if not adventurous though and so decided that the only way to find out was to pack our bags (mostly with comics) and get over there. And this time we had three bags as we were being joined by co-creator, co-writer and artist on WesterNoir, Gary Crutchley. This was to be Gary's first Con overseas so we were secretly hoping that it'd be a good one for him.
The Festival itself was to be spread over two and a half days, two and a half very long days, which meant that we had to fly out on Thursday and fly back Monday, if we were to be at the entire Festival. We decided to stay an extra day though, so that we could enjoy the city, and so were to come back on Tuesday (very early).
My Thursday started at 5am,leaving the house and setting off in the opposite direction to Manchester Airport at 5.30am in order to pick Gary up from his house. Arriving 30 minutes early meant that Gary didn't have time for breakfast (I didn't feel too bad as I'd not had any either) but it did mean that we were pretty much on schedule for arriving at Colin's at 7.15am. A quick game of ''Weigh the bags on Colin's scales to get as many comics in as possible and not exceed the 23kg limit'' and we were soon in a taxi heading for the airport.
At the airport the bags weighed in at 22.7kg, so not too bad at all.

A short flight with not too much tilting (Gary hates it when planes tilt) and we were in Helsinki, which was 2 hours ahead of UK time. 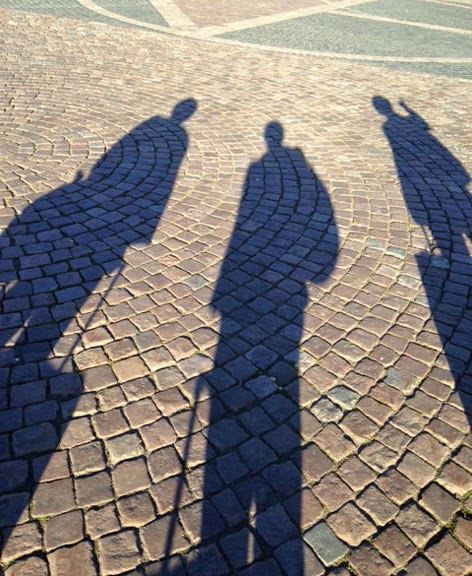 We quickly settled into the hotel, Arthur, and as quickly settled into our first pint. I bought the first round and was a little shocked at the price. 24 Euros for three beers. Beer certainly isn't cheap in Helsinki. We took our time drinking it and then we set off to find the venue, tomorrow we'd be lugging a whole load of comics there so it's always best to know where you're going. 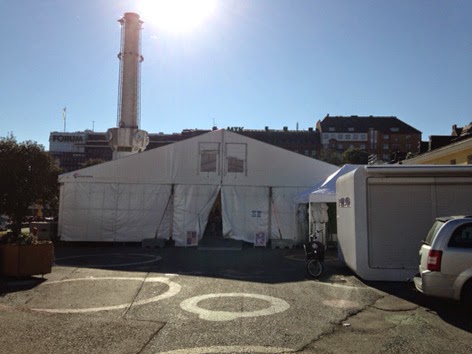 The venue was very central, a large marquee that was a stone's throw away from the train and bus stations. As we wandered around inside looking for an organiser it was a hive of activity, people setting up tables and people from the comic stores carrying in a large number of crates of comics. We decided we'd best leave them all to it and went to find somewhere to have tea, ending up at a place called O'Leary's and having a burger. We stopped off for another beer at the local pub, this time it was Colin's round. We all sauntered over to the bar.
'What's this beer like ?' Colin asked the barman pointing at a beer tap on the counter.
'It's Finnish.' was the reply.
'Oh', said Colin, that's a shame. 'What about this one then ? Do you have any of that left ?'
The barman looked at Colin in that confused way that people have when someone has said something that makes absolutely no sense.
'I think he means it's a local beer Colin,' I suggested, ' It's Finnish not finished.'
'Oh,' Colin was catching on, 'Can we have three pints please.'
We drank the pints, chatted about comics, Helsinki and about the Festival and wondered how it would go for us. It's a Festival that's been going since 1979 but this was the first time they will have come across Accent UK. 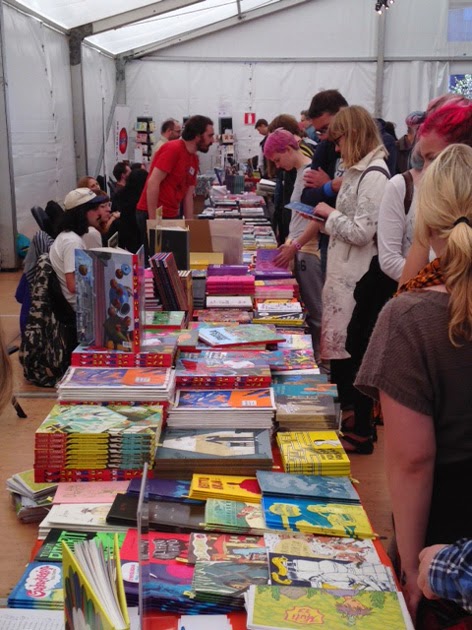 A reasonable start to the Friday, not too early as the Festival started in the early afternoon, and stomach's full of hotel breakfast, laden with comics, we set off again for the venue. It was hot. Not the weather you'd expect this time of year in Finland, so we paced ourselves a bit. On arrival, and after a quick discussion with one of the organisers, we were soon stood behind a quite large table. We had arrived. We had a table. A good start. We set up pretty quickly, as we do these days, we're pretty practised at this type of thing, and then we wandered around, meeting Germans, Latvians and Italians, as well as Scots (yep) and the Finnish organisers. As always I was impressed by the quality of the books on display, and whilst there were a good number in Finnish, there were plenty in English, which was a good sign. 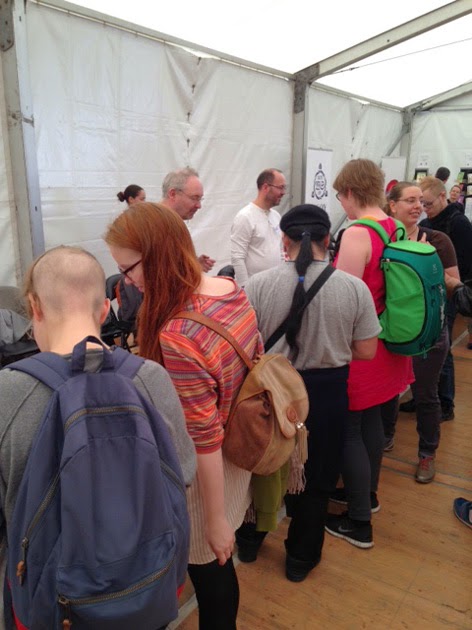 The Festival started and had pretty good footfall for a Friday afternoon. We sold some books and were feeling OK about things and then around 6pm (the first day went on to 8pm) it got busy and we were meeting a lot of interested people and selling a good number of books. 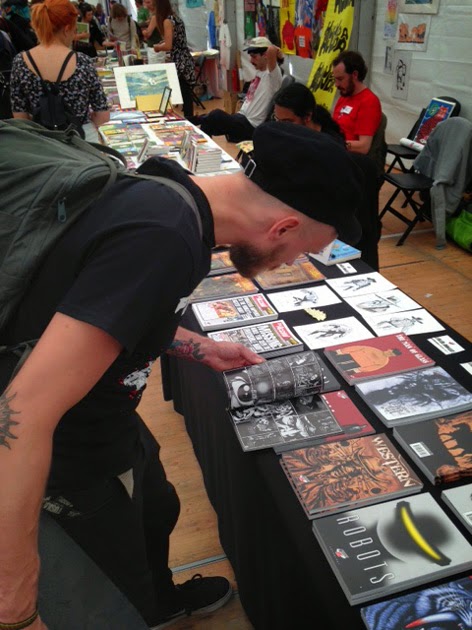 We wandered out at around 8.30pm, pretty tired but feeling good about things. We'd brought quite a lot of comics with us and it looked like we'd not be taking most of them back with us again.
We decided to eat at an Italian restaurant, which was on the way back to the hotel, although Colin was keen on exploring, and very nice it was too, although a little difficult to fathom at first. Everything was charged to a plastic card which you settled on exiting the place.
We decided, as it was between the Italian restaurant and our hotel, that we'd have a last drink of the day in what was becoming 'our local'.

'Three pints please'.
'It's finished', replied the young barmaid.
'Yes, I know', replied Colin, 'and very nice it is too'.
The barmaid just looked at him in a bemused way, and smiled. And waited.
Colin's confidence started to erode.
I leaned close to him.
'I think it's run out', I whispered.
'Oh', he exclaimed ... 'err ... well ... we'll try some of that,' he pointed at a random beer that had Thor in the name and whilst she was pouring it we told the barmaid what had happened the night before and how we were confusing the word 'Finish' with 'finished', she found it quite quaint. Brits abroad.

Saturday saw a reasonably early start, a decent hotel breakfast and a slight detour through town, seeing us arrive at the venue about 30 minutes before the 'doors' opened. 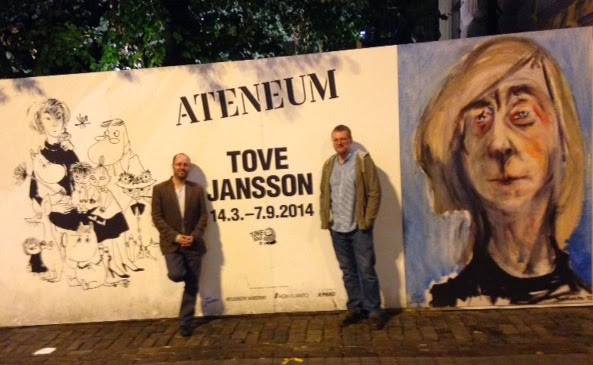 It was on this day that we met Eduardo Serradilla who knew a lot about most things, and was taken by our WesterNoir and Wolfmen books. He gave us some tips on how to sell to the Fins and also, after a good chat, left telling us that if he liked our books then he'd post a review of them up on his news-website (see previous post).
The day went really well, we chatted to the other creators around us and I managed to get a couple of sketched books from the very talented and very nice Tony Sandoval, who only sat at his table for about 2 hours a day, as he was enjoying the local attractions, maybe a little too much.
It was on Saturday that we reached a landmark for Accent UK. We sold our '1000th Convention Comic Book in a Year', and despite there still being two more scheduled Conventions to go. A great moment that had to be captured... 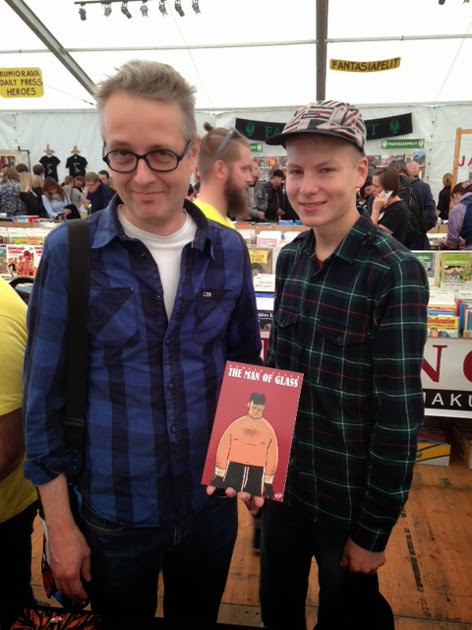 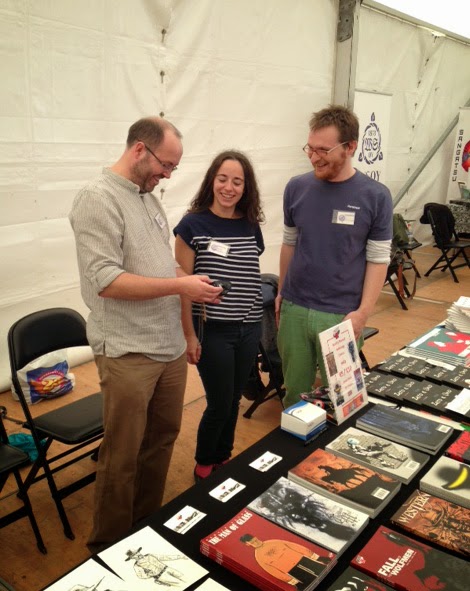 Saturday night we had tea with Luigi and Nadia (MalEdizioni), the Italians who had the table next to us, and declined the offer to meet up with Tony later and 'party'. A very nice evening in a restaurant that had a tractor theme, I kid you not, ended up with us all having a drink in a local bar before going our separate ways. 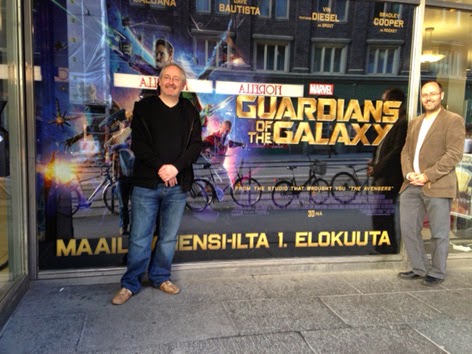 Sunday was not as busy as Saturday but busier than Friday and saw us meeting with Eduardo again and his wife, Elena, who had loved WesterNoir (I think Eduardo preferred The Wolfmen). We had a great chat about the books and were invited to visit Eduardo's EC Comics exhibition in the local library. 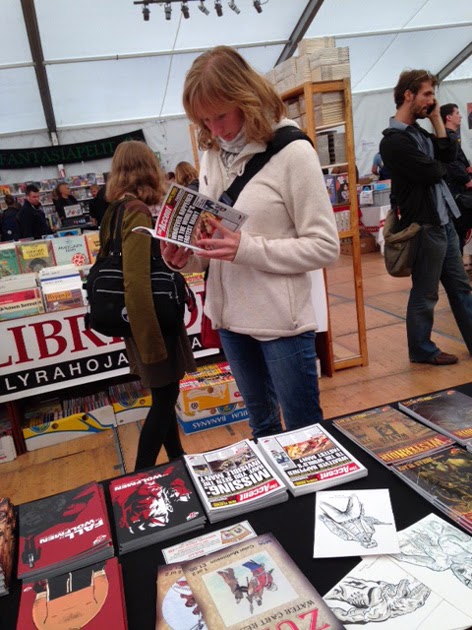 Whilst the Saturday was from 11am to 8pm, the Sunday finished at 6pm. Long days but not slow and whilst there were quiet periods, they didn't seem as long as they do at most UK cons. Consequently by the end of Sunday we were all shattered. Good job then that we returned to the hotel with far fewer books that we had carried from it only a few days before. 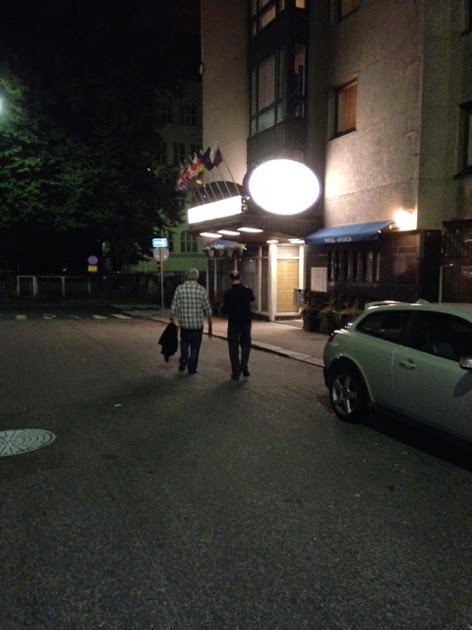 A quiet night, we ate tea back at the hotel, popped out for a pint (or two) in 'our local' and then crashed, trying to recharge batteries.
Monday was a day for doing tourist things. To get a feel for the city to see if it was somewhere to bring our families, and to buy them a few presents. We were to meet Matt Boyce later for a meal, Matt being a good friend of ours from the UK who was presenting at the event had suggested that he knew somewhere 'cheap but good'. 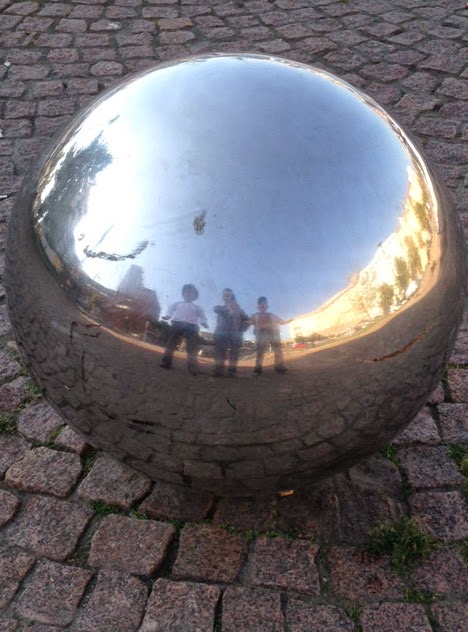 Helsinki is definitely somewhere to bring our families. It's a great city with plenty to do. We popped in to see Eduardo's great little EC exhibition and bid him farewell, 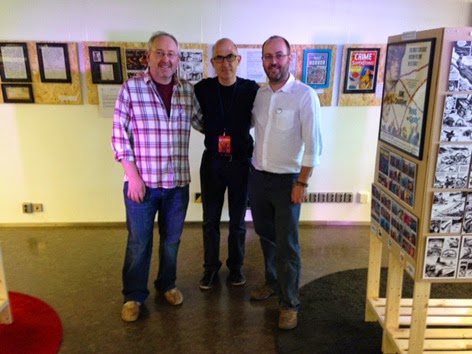 we bought some presents and we met Matt as arranged. After the very good and cheap food, we ended up in a surreal British pub, with manikins wearing flat caps in the window and darts boards on the wall. 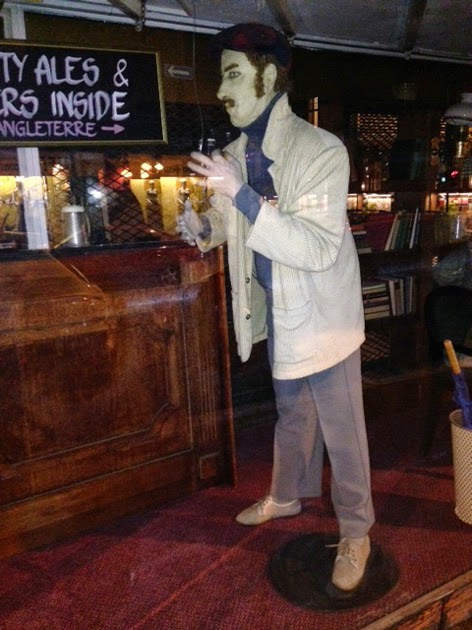 A very nice evening where Gary and I thrashed Colin and Matt. 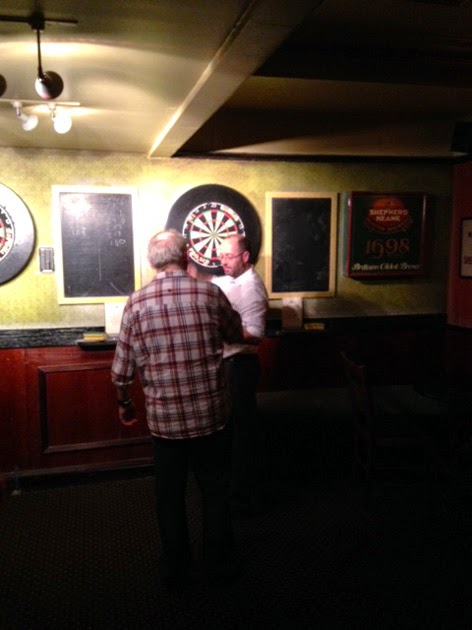 An early(ish) night as we had to be up at 5am to get the bus to the airport for an early flight home.
So, Helsinki. Would we go back ?
We certainly would. Both for the convention and for a family holiday. 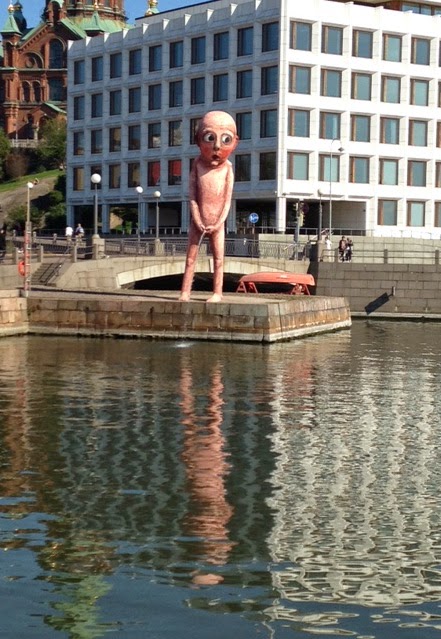