Playing around with collage...

I've been spending most of the last few months either preparing for Conventions, attending them, recovering from them, blogging, tweeting, facebooking or writing (and I'm pleased to say that I've roughed out Issue 2 of WesterNoir).It's difficult to do all of this and still attempt anything 'art'y (I was tempted to say artistic but that would imply a certain amount of prowess).
To keep my hand in with the cutting and sticking, I think they're called collages in the real world, I've decided to have a go at making a few cards that are roughly the size of those old Victorian photos and follow this theme so far as to setting characters into that time period.
First up in The Iron Man... 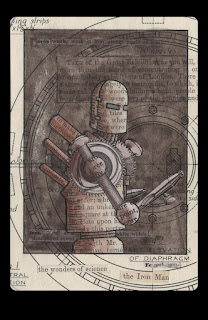 I think I got a bit too heavy with the background brown, and will try a good old cup of Earl Grey tea for the next one rather than acrylic paint.
Posted by Dave West at 11:40