Not wanting to start the New Year on a down note, but when will I get rid of this damned Flu Virus ? Not only is it messing up my Bank Holiday enjoyment but has also chewed its way through three days of holiday that I took between XMas and New Year ... due to this I've done little more than sit in front of 9 hours of The Lord Of The Rings with my daughter (and her comment at the end of it all ? ' I prefer Harry Potter...').

We did manage to get a few games in there and as is traditional I managed to own the Bank at the end of our Monolopy session, I won't talk about the other games, being beaten at Scrabble by a 12 year old is something that I need to deal with in my own time ....


A friend at work showed me a book that I found really amusing. It's called Movie Charts, by Paul Copperwaite, and using pie charts (etc) to reflect certain elements, and messages, of films we all know and love. I've not copied any here, but have made one up concerning the movie 300 that should show you the type of thing it contains. Not to evertone's taste I know but it appealed to me. 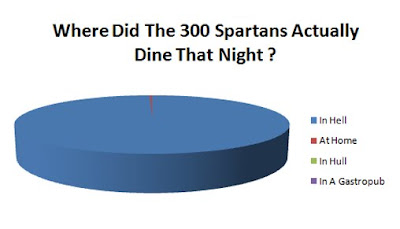 I've made a few New Year's resolutions, in the hope that one makes out beyond January, but am not brave enough to share them with the wider world, as they'd then be played back to me on a weekly basis.


On the comic front, The Fall Of The Wolfmen, written by myself and illustrated by Mr Bloor has been reviewed over on http://www.hypergeek.ca/2010/12/comic-review-fall-of-the-wolfmen.html. Good timing as the comic itself is listed in Jan's PREVIEWS. if you'd like a copy then now id hte time to pop in to your local comic shop and get them to order one for you.


In other news, Steve Holder has a blog up and running over at http://holdersteve.blogspot.com/. Steve and I are collaborating on a couple of projects at the moment. Robot Shorts, a collection of tales about ... Robots .. that are .. well ... short. The stories that is, not the robots themselves. Steve is also illustrating a future Blessed/Cursed comic, but I'll keep that under wraps a bit at the moment. 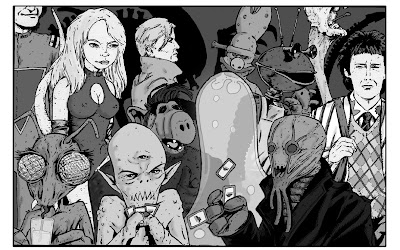 Here's an image of Steve's that I've greyscaled, but sadly we've decided it best not to include it. To find out more then pop over to Steve blog, there's a link on the left :o)