WesterNoir is on a journey.
What started as an idea for a one shot idea quickly moved on to become a greyscale limited series.
In this format it has reached issue 8, with issue 9 in development.
It has seen the first 4 issues collected as a Trade Paperback.
And it has a spin off companion title, Tales Of WesterNoir.
During this time co-creator and artist Gary Crutchley and I have often played with the idea of seeing the book in colour. Wouldn't that be cool.
And then we got to know Matt Soffe and work with him on the covers.
And we just knew that we had to do it.
If we were going to do this then could we use the opportunity to redo a few things that we wanted to improve?
Well, why not?
Produce a remastered coloured version of the trade paperback.
The only reason we could see against doing this is that it might annoy people who have already got the greyscale versions of the comics or trade paperback.
What if we put the thing online then? So they could see it and read it without having to pay for it?
And what if, when we do print it, we give them a discount to offset the fact that they have the greyscale versions?
OK, we thought that could work.
So, you can follow the pages, we release one a week, over on Smackjeeves, we're currently up to page 50. We were going to announce this later but I think in the current climate it might be nice to have something to read.
Hope you enjoy it. 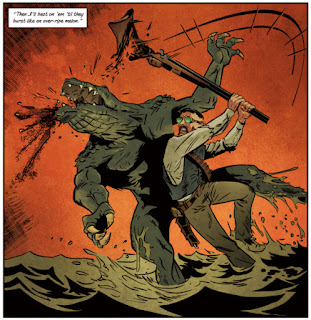