Our third comic is up on Kickstarter.
Kia Wordsmith is a story that I've had in pre-production (as it were) for many years.
It needed the right type of artist.
It's about a young woman thief living in a fantasy type setting.
So it needed someone who could draw the human form as well as non-human forms and fantastical settings.
Enter Ian Ashcroft.
Ian's work is astonishing and I'm incredibly lucky to have him on board for at least 4 issues. 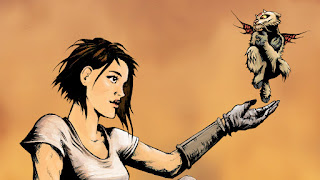 He captured my view of the look of Kia better than I could explain, almost as if he read my mind.
As t the little creature.
Well, I had no real picture of what it wold look like and asked Ian to 'do his thing'.
I love the result.
The Kickstarter has already exceeded its target, which is fabulous, and there's still 21 days to go.
I'll be looking to get it printed before the Kickstarter finishes, as I want it ready for the Nottingham Convention on the 20th October where both Accent UK and Ian Ashcroft (who will have his own table for the first time) will be selling copies.
All looks to be on track so far.
www.kickstarter.com
Posted by Dave West at 11:03