Skulduggery Pleasant is one of the central characters in the series of wonderful books by Derek Landy.
I can't remember who started reading these first in the West household but we are all fans of the series and eagerly await each new book.
I was shocked this week whilst wandering through the Arndale in Manchester to see that Derek Landy was due to do a book signing on Saturday (that's today) at 10am. I risked being late for the meeting I was rushing to, to text my daughter Jemma, but should have known that of course her phone would be out of charge.
Anyway, it was back to Manchester today and we were in the queue as the doors to W H Smiths opened at 9am.
What a nice bloke Derek Landy is. 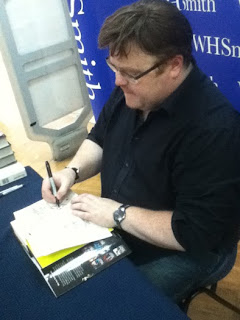 He was very generous with his time as he chatted to each eager fan in turn and was more than happy to pose for photos. 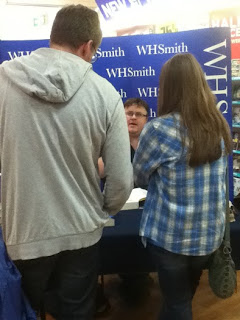 Jemma asked him about where his ideas came from and he told about his decision to set the skeleton detective in today's world rather than a purely fantasy setting and I think I surprised him when I followed her question by asking whether he had clearly defined rules about how magic worked in his 'universe'.
Yes, I do read the books myself.
He then went on to sign Jemma's copy of Deathbringer (which is her favourite, so far) and almost personalised my copy of the latest, Last Stand Of Dead Men, to Jemma as well, but we stopped him just in time, he'd written 'To', and I now have 'To Dave' rather than 'To Jemma' in my copy of the book I'll start reading tonight. 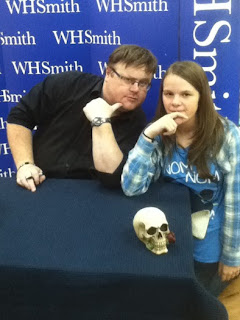 Jemma then got her photo taken with one of her favourite authors.
We had a great day.
Posted by Dave West at 11:53