Strange Times was always going to be a trilogy in two parts, and I'd always intended the cover of the second book to reflect that of the first. I wanted it to be similar, but different.
The danger though, as I've experienced a little with my Blessed/Cursed books, Whatever Happened To The World's Fastest Man ? and Missing - Have You Seen The Invisible Man ?, is that this can confuse people. I've had customers at the table in conventions say that they'd read The Invisible Man when I knew that they couldn't have. When I then show them Fastest Man and point out that it's different they have all then bought the new book.
So.
Strange Times Book 2.
How to make it similar, but different.
How about use a different character in a different car. How about it being a car that flies (which does appear in the book). Hmmmm ... still looks too similar...
OK, how about setting it at night. 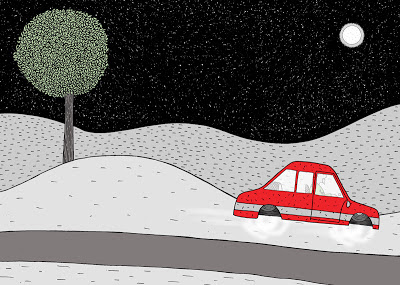 OK, that seems to work. I had to lose the animal this time as it's night but I quite liked it.
Time to send it off to Andy Bloor to work his magic.
Andy had problems with the moon. I hadn't thought about the placement of the book title.
That's why I'm not a designer. 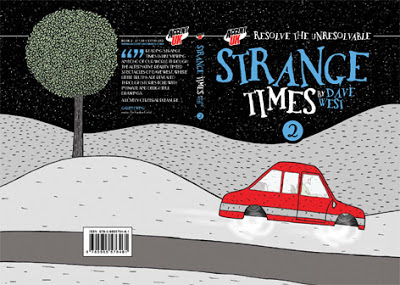 Yep. I like that. I had thought to make the lettering red, similar to the car but once again Andy had been right to make it blue.
A day or so later however I wondered that maybe the background fields were a little too light and that they lost the impact of the vapour beneath the car. 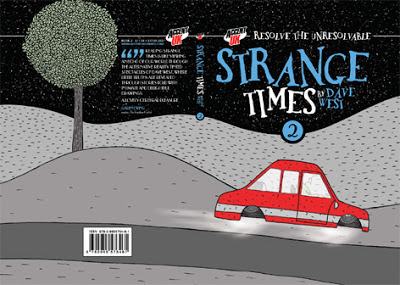 And there you have it. I'm really happy with the finished look.
Now I just need to sort out a quote for the back cover... oh, and finish the internal pages.
Thanks as always to Andy for his help in making our books so polished, and for being patient with my 'ideas'.
Posted by Dave West at 12:08