It's going to be an interesting year being part of Time Bomb Comics.

We're keeping our cards a little close to our chests at the moment but it starts with a Q... 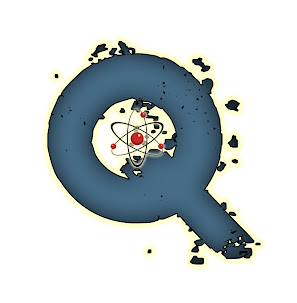 So, it's been an eventful year, some positive things have happened and some not so.

I'm hoping that in 2023 I get complete control of my feet back so I can drive a car again, or failing that have managed to get a modified car that will allow me to get back into my old life.

Popping to Cons... seeing friends... popping into new towns for a look around ... nothing too extravagant.

I will say that we take a lot of things for granted and never really think about what would happen if we lost something that we are able to do without thinking. I certainly never expected to have a mysterious infection hit both my legs and have the impact it has.

I'll not get bleak though...

Hope to see a lot of you at Conventions around the country next year, or who knows, maybe you'll hear a knock on the door and it'll be me in my new driver-less car.

Actually if it's a driver-less car it'll probably be the car that's knocking on your door.

Three big things that happened to me this year - Part Three.

The last significant thing that happened to me was that I've finally managed to buy a house.

Since my divorce I've been renting, it's been a few years now, and I've decided that I like High Wycombe enough to make things a little more permanent.

After months of viewing, placing bids and getting my bids beaten I decided to get my daughter involved in the process.

I set up a few viewings over a weekend and invited Jemma down to view them with me. If I was going to bid more than £5k over the asking price then I needed a second opinion.

Having viewed a few with Jemma, she quite patiently asked me why I was trying to buy the same house that we used to have. The ones I was looking at, she pointed out, will never be as good.

Jemma then selected a few houses to view and one was nothing that I would have selected.

I didn't think too much of the look of the loft conversion from the outside, it being one of the box types to maximise head room inside. Jemma, again quite patiently, reminded me that I'd be spending most of my time in the room looking out of it than I would on the street looking up at it.

I really liked the rest of it.

It even had a great shed for comic book storage.

I put the offer in, at £10k over asking price, and requested that they leave carpets and curtains.

My offer was accepted.

I moved in in September. There's even space outside to park my car so it's not on a road. Not that I can use it at the moment.
Settling in .. sorting through my posters / pictures to decided which ones go where whilst trying to not turn the house into a Superhero gallery.
Had my first snow... 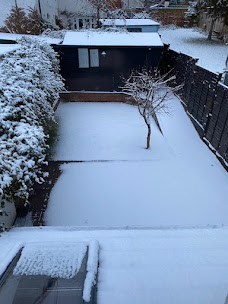 and my first Xmas here... sadly on different days.
Looking forward to making it feel more like 'my house' over the coming year.

Well, over Xmas break I caught up with the Targaryens in House of Dragons.

I loved all but the last season of Game of Thrones and was hoping that they'd pick up some of the potential prequels and/or sequels. 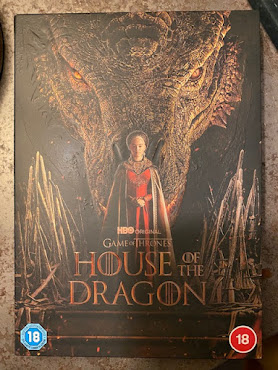 Managing Kickstarters when you can't drive.

I ran two kickstarters whilst all of this has been going on.

I can't drive to a post office and don't want to keep getting taxis back and forth.

Gary put me onto a Royal Mail service that I wasn't aware of, where they collect the parcels from your home. They even print the labels out for you to stick on them.

A great service that I used a lot in Nov for the WesterNoir postings and that I will use again in a week or so for the Kia Wordsmith postings.

..and you don't have to pay any extra for this service.

Three big things that happened to me this year - Part Two.

Back on the evening of the 6th July I struggled to get to sleep due to pain in both my legs below the knees. I ended up in absolute agony and had to call 111, as I'd done everything I could think of to ease the pain.

Ultimately an ambulance came out to me and once they'd confirmed that I wasn't having, or going to have, a heart attack weren't really much use.

It pain had eased off a little, but I was left with massively inflamed and swollen legs (below the knee) and feet.

I spent the next week in my rented flat, on the third floor, unable to do much at all apart from take paracetamol and Ibuprofen, keep my legs up and apply hot and cold compresses to my shins and feet.

Failing to get to the Dr in the surgery I eventually booked an appointment with the Health Centre's Physio, as I was struggling to walk, I had developed this shuffle where my feet never left the ground. If my shuffling feet came in contact with a rug or anything like that them I'd effectively fall over it. It was very graceful.

Having to take a taxi ride to the Physio, I found myself sat in the Health Centre on the 13th July, still in some pain (but nothing like the worst of it which was on the 7th). I wasn't surprised by the look on the Physio's face as I did my strange walk, which was an improvement from the shuffle, towards him. I effectively couldn't lift my feet at the ankle, effectively raising the toes, and had to lift my knees high and swing my lower legs to flick the foot out and then land my weight on it, so it all came down together with a splat.

The physio said I had 'dropsy' due to nerve damage sustained whilst my legs had swollen but was stunned by the swelling still there around my legs and ankles and went to see a Dr. He came back with a prescription for a strong anti-biotic.

A week later I was back in, actually seeing a Dr this time, and was prescribed an anti-inflammatory. The anti-biotics had done some good but my legs and feet were still swollen and I still struggled to walk.

A week later, not much improvement I tried to get to see the Dr again, to follow up on the anti-inflammatories, failed to do so and so took a taxi to the local hospital's A&E.

I didn't have to wait too long as it turned out, and after a quick examination was sent to a hospital (not the closest one though) to have a DVT scan.

Another taxi ride later, and after the test I was informed that it wasn't DVT and to come back tomorrow for a different scan.

A few taxi rides later, there's no way I could drive with my feet as they were, and I found myself back the next day with another negative result from another scan.

I was asked to stay in the ward until they could sort me out.

Although I was only dressed in shorts, t-shirt and saddles (the only shoes I could get my feet into) with my wallet and iPhone in my pockets I checked myself in.

The NHS staff are all wonderful human beings. I was constantly humbled by pretty much everything they did, day in and day out.

A week later and I was checking out again with the knowledge that my thyroid was incredibly small and not producing anywhere near enough Thyroxine.

They never did explain the infections but I had a diagnosis, knowledge of a whole load of things I haven't got and a prescription to sort me out.

It's funny that before all of this I had thought I had bad congestion, my voice sounded very growly and a little drunk.

Turns out this was all linked and my voice is now back to normal.

Sadly the same can't be said of my feet. My walking is much improved but I still can't lift my toes as I stride along and so I have to lift my feet and put them down carefully in front of me with each step.

I get overtaken by everybody now.

I still can't drive as my feet can't work a clutch, accelerator or brake, which has a massive impact on my mobility. Missing Cons, having to wfh despite things lifting (rightly or wrongly) from a Covid perspective and generally not being able to just pop somewhere if needed, or fancied.

Looks like this might be it I guess, as good as my feet will get, so I'm going to have to look at cars that you can drive with your hands, an automatic with hand controlled brake and accelerator I guess.

I'll decide after my next appointment with the hospital, at the end of Jan.

Yep, not a great second half of the year and frustrating to still be impacted by it all some 6 months later, but there are people in worse situations.

The Stephenson's Robot Companion Book - and just when the colouring is going well... ...and you just know that this is going to take quite a while to complete.
Better stock up on the tea and biscuits, select a few good tracks and get cracking.